windows 11is a new version of Windows, and many new features and improvements are now being introduced to supported PCs.

Windows 11 was launched on October 5th, and Microsoft also released the Windows 11 ISO image. Unlike the previous Windows 10 update, this new operating system focuses on consumer-oriented features and improvements and is certainly more than the relatively low-key Windows updates released in the past few years. 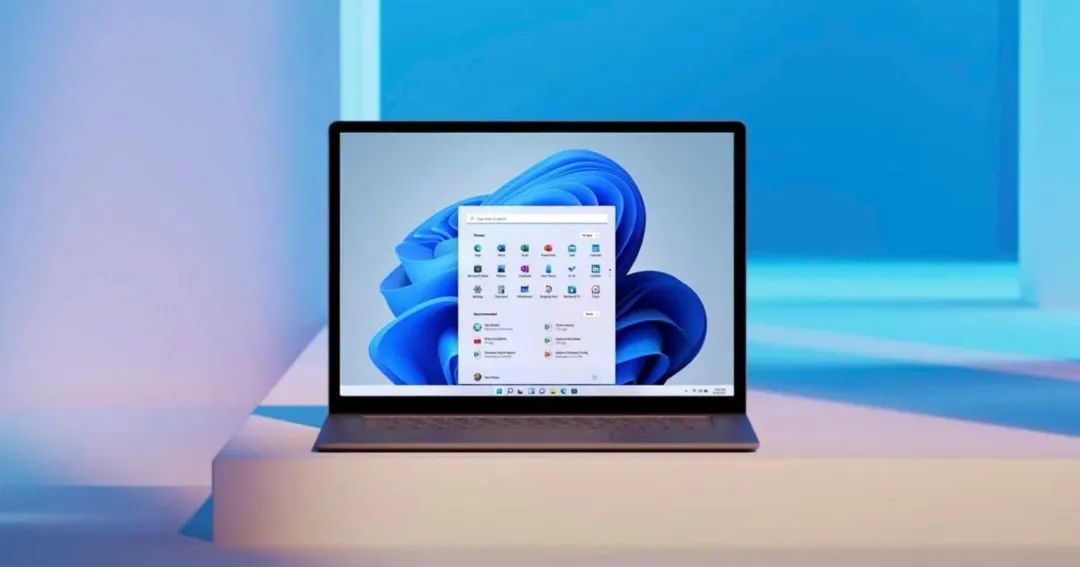 The software compatibility remains unchanged with Windows 11, which means that old applications can still run. As usual, you need new versions of some applications and tools to get the most out of Windows.

Windows 11 comes with a new start menu and taskbar experience, as shown in the screenshot below. 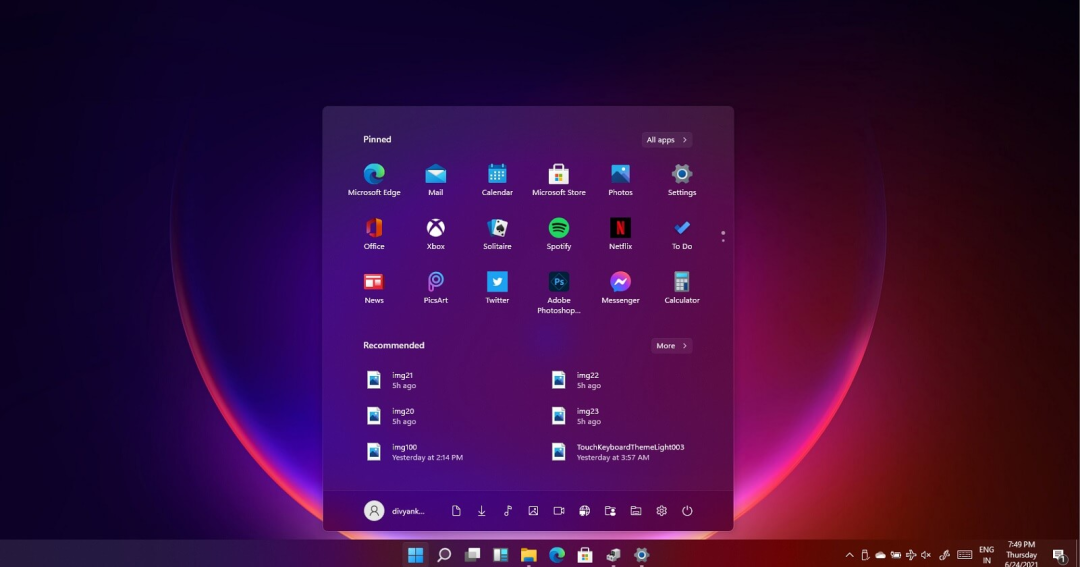 Live Tiles have been replaced by icons, similar to Android and iOS. You can still switch back to the left-aligned start menu and apply accent colours to customize the appearance of the operating system. 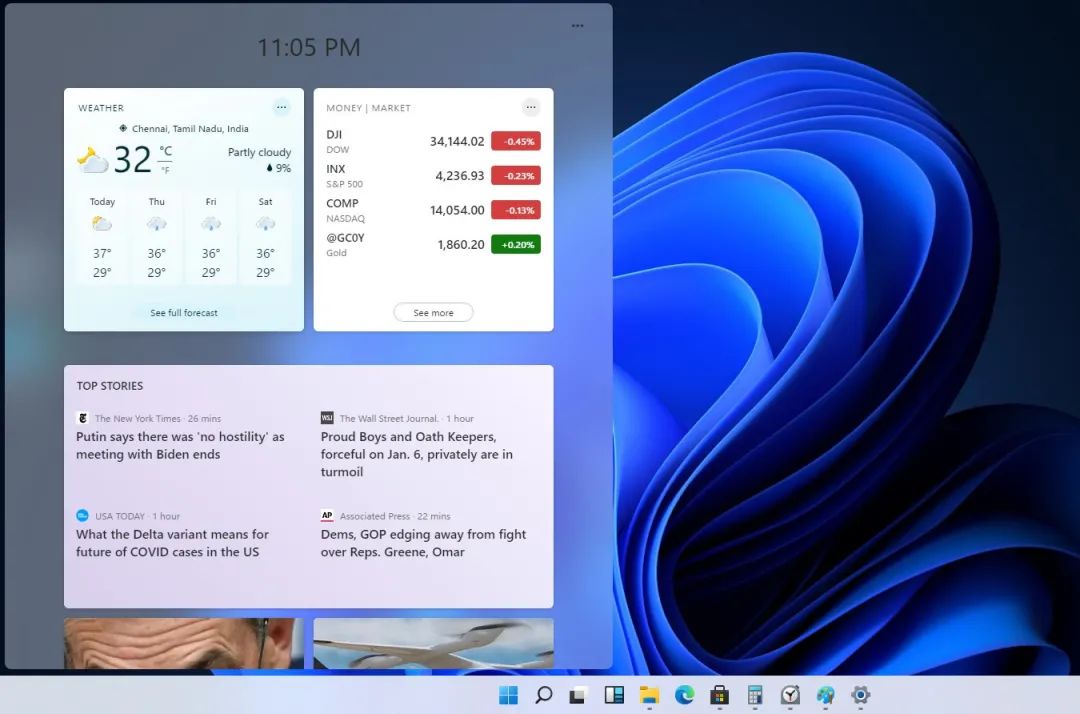 Microsoft is introducing widgets similar to Windows Vista widgets to the desktop. This will allow users to view their Microsoft information on the desktop and get daily updates on weather and traffic. 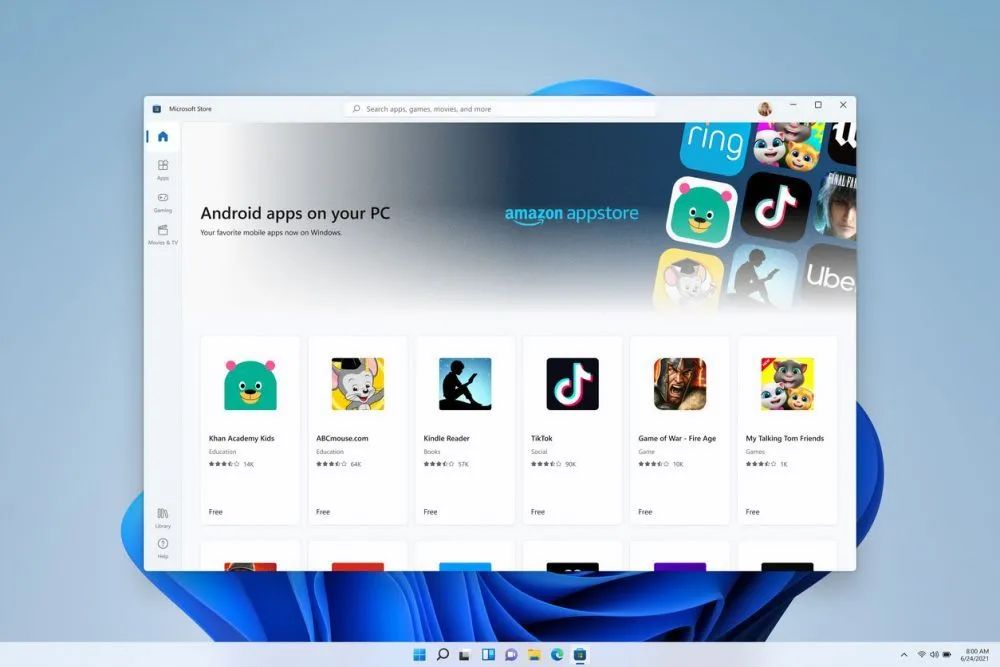 Microsoft is launching a new app store for Windows 11 and Windows 10. It has been redesigned to help users discover and install their favourite applications, games, movies, etc.

Microsoft is redesigning the Windows clipboard panel, which includes a new panel for inserting GIFs and emojis into your applications. You can press Win+V to start the clipboard manager and select or search for materials through the search bar in the menu, instead of searching for GIFs and emojis online, as shown in the figure below. 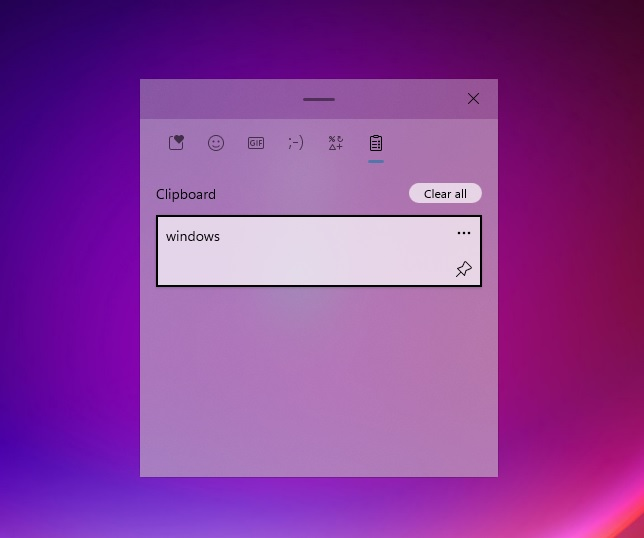 The Windows clipboard also got a new feature called "Paste as Plain Text". As you may know, when copying text content from a webpage or email, Windows 10 currently retains the formatting of the text content. If you paste the content into other applications such as Word, you will find that the formatting is not aligned.

In Windows 11, users can open the clipboard menu (Win + V) and paste the content as plain text, deleting all unnecessary formatting.

As part of the redesign, you can switch between multiple keyboard layouts. When undocking, Windows allows you to switch to the keypad layout, which allows you to move around the screen easily.

There is a new "handle area" at the top of the keyboard. You can tap and hold the grip area to easily move the keyboard around the desktop and applications. Microsoft has also updated the small layout and split layout, and has a new settings menu to improve clarity and focus on important tools.

Since Windows 8, the touch keyboard has been an important part of Windows, but it has never received additional customization options. Windows 11 is improving the touch experience, and the company has also introduced support for keyboard backgrounds.

Under C:\Windows\Web\touchkeyboard, you will find eight new keyboard backgrounds, each with light and dark variants.

The Windows Settings application also got a new keyboard settings page to help users understand the colour and size of the keyboard.

In Windows 11, Microsoft is redesigning the task view screen to provide new controls for the virtual desktop.

By default, the taskbar has a task view button, and you can click it to launch the task view. As the name suggests, task view allows you to view all open windows on the desktop, including minimized or maximized windows. 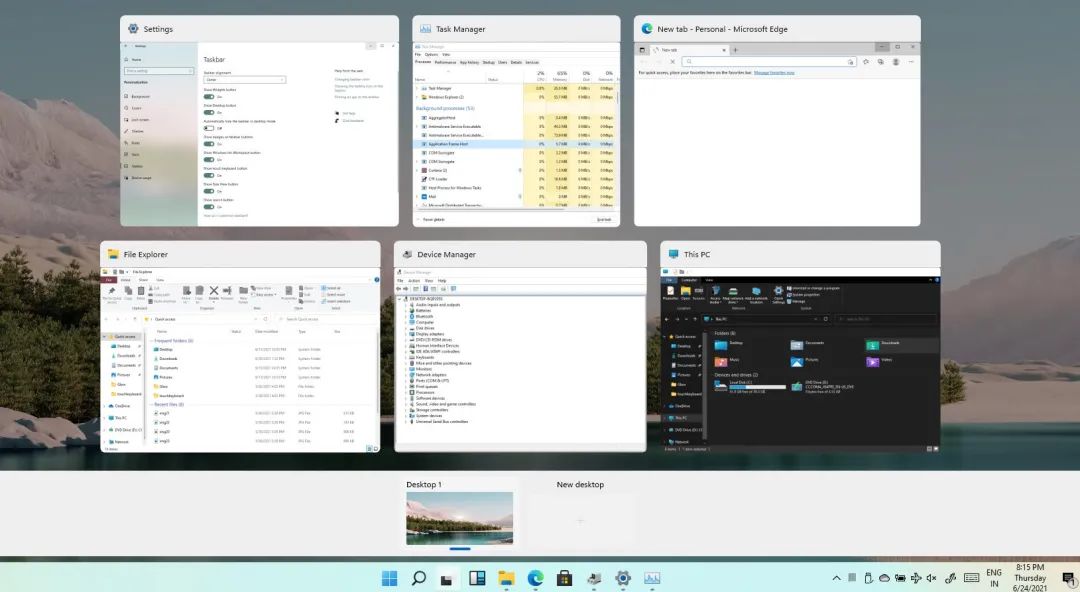 The task view function also supports "multi-desktop", which is a good way to separate tasks. On Windows 11, you can rename, reorder, and customize the background for each virtual desktop.

For example, you can use one virtual desktop for work projects and another for personal content (such as streaming media). You can create as many virtual desktops as you need, but you may not need more than two or three.

Microsoft is improving the subtitle settings in Windows 11. You can find the new controls in "Settings"> "Ease of Access"> "Listening"> "Subtitles".

We have been testing earlier versions of the operating system, and we have also found a new webcam setting in "Settings"> "Devices"> "Camera". The new webcam settings allow you to configure the webcam connected to the device. This includes external and built-in cameras on laptops/desktops.

From the settings, you can now adjust the brightness and contrast of the webcam to improve image quality. Previously, webcams could only be customized through third-party applications, because Windows never provided a webcam settings page.

There is also a new feature that shows when your webcam is used by applications such as Discord, Skype, Teams, etc. When the camera is used in the background, the icon on the taskbar system tray will remind you.

In Windows 11, Microsoft is unifying the audio endpoints, which means you can now switch between the microphone and the speaker without having to manually change the audio endpoints. By default, Windows will only expose one endpoint in the taskbar and will automatically switch to the correct endpoint.

This will ensure that you have a seamless experience when switching between applications such as Spotify and Microsoft Teams.

Microsoft has also introduced support for the AAC codec, which can achieve high-quality audio streaming on your Bluetooth headsets (such as AirPods).

Microsoft is adding new controls to display the Windows settings page. For example, we got a new "Content Adaptive Brightness Control (CABC)" option, which can be turned off to improve image quality.

As you may know, some devices use CABC technology to improve battery performance, but the problem with this feature is that it reduces image quality. In fact, it can even cause annoying brightness changes and affect colour accuracy.

Fortunately, you can now turn off CABC in the "Display" settings via "Settings"> "System"> "Display".

Initially, this only applies to selected Dolby Vision and VESA DisplayHDR models, so you may not see HDR certification after the update.

The default layout of the classic file explorer has been updated with additional padding to improve the touch screen experience.

If you prefer the old layout, Microsoft has added a new option called "Use compact mode", which can be accessed from the folder view options. When you turn on this feature, it will restore the classic layout and remove the extra padding.

Microsoft previously stated that the additional padding is designed to better align with modern Windows features. Since the tablet mode has been removed, the UX of the existing interface is being updated to make it easier to handle files/folders when using the touch screen. 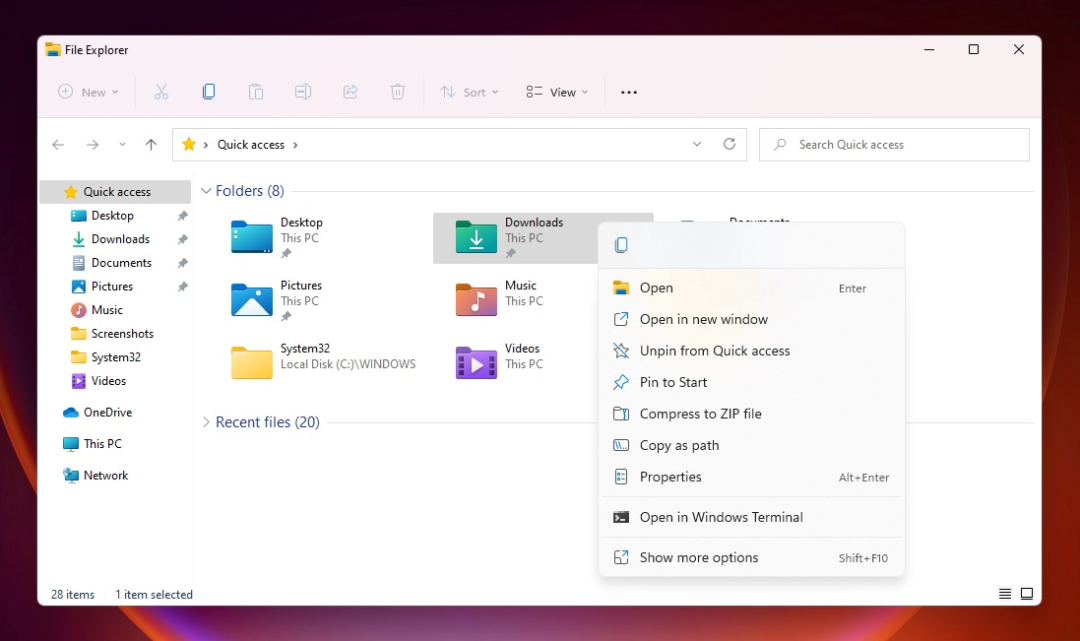 Microsoft is refreshing the orientation of folder icons and default file type icons. These folders include desktops, documents, downloads, and pictures. The trash bin icon has also been updated.

File Explorer now has a new title experience called "Command Bar", which supports the mica material of Windows 11 and applies the desktop background and accent colours to the title.

11. Change the file type from settings:

The new Windows Settings application will eventually improve the "Select Default Application" menu. By default, Windows knows applications that can open certain file types, and the operating system will automatically configure applications for your file types.

Microsoft has made some changes to the Windows 11 search engine to help improve the performance of the operating system when it scans the list of available file types, protocols, and applications on the system.

The new settings application will eventually allow users to easily find the file type or application you are looking for. This small fix may be helpful to anyone who has trouble changing the default application for certain file types.

Windows 11 can now monitor the storage health of NVMe SSDs and notify users when user data is at risk.

This feature can be found in the "Settings" application and is designed to detect hardware anomalies in NVMe SSDs. If a problem with your drive is detected, a notification will appear to remind the user that it’s time to take action. The notice will urge users to back up and start the restoration process.

13. Optimized drive tools are getting better and better:

In Windows 11, some traditional functions such as "optimized drive" have also been slightly improved.

For example, we got a new "Advanced View" checkbox, which will show your hidden volumes. There is also a new checkbox "Current Status", which will contain more detailed information when the volume is not available for defragmentation.

The existing emojis have also been visually modified to improve consistency between Microsoft products.

Microsoft is updating the default font UI Segoe for the entire system. As part of the transformation, you will notice the new Segoe Fluent icon in applications such as Settings and Control Panel. Segoe MDL2 assets for the store and start menu will include new icon designs with rounded corners and a uniform appearance.

Windows Update will also introduce a new Segoe UI variable to optimize system fonts for all form factors, including display sizes from small to large. This new font technology will provide excellent legibility for all sizes, including small and large.

Microsoft is using Windows 10X technology to provide support for Windows Sandbox and Microsoft Defender Application Guard. This new special container technology is designed and optimized for container scenarios, and it will significantly improve the startup time of Windows Sandbox.

For those who don't know, Windows Sandbox provides an isolated temporary virtual environment to download and run unknown and malicious applications.

In addition, Windows Sandbox has been updated to the new Chromium-based Microsoft Edge browser.

For example, 3D Viewer and Paint 3D will no longer be pre-installed on Windows. If needed, you can find these apps in the app store.

Due to low usage, Microsoft also removed the math input panel. However, you can still download and install the "Math Input Panel" through "Settings"> "Applications"> "Apps and Features" to use the input control and math recognition engine.

18. The old native apps are now updated through the app store:

Windows Update retains the old screenshot tool and can now be updated through the Microsoft Store.

Microsoft is introducing a new "Windows Tools" folder, which will open in File Explorer and contain links to advanced applications such as PowerShell and Windows accessories.

Microsoft basically organizes management and system tools under the Windows tools folder. As part of this work, Windows PowerShell and other tools have now been removed from the Start> All Applications list.

These tools can now be accessed through the Windows tools folder. Of course, you can still find PowerShell through the Windows 11 start menu to Windows Search. As part of this work, Microsoft also moved the File Explorer to its own position in the Start menu.